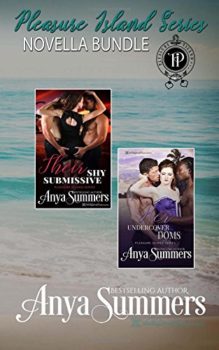 From the moment Deke Estevez and Shep Jackson began working on Pleasure Island as catamaran captains, ferrying guests and supplies to and from Nassau, they have craved the shy, sweet, voluptuous beauty, Yvette. When she agrees to a scene with them one evening after having been stood up at the club, the trio experiences a night of hedonistic pleasure like no other.

Deke and Shep know that Yvette is the woman they’ve always wanted, but they both have past demons which threaten to destroy their budding relationship before it’s even really begun. Can they convince Yvette to be their submissive — not just the night, but for forever?

Her Undercover Doms
(originally published November 2017 in in eBook)

Sherry can’t believe her luck; she followed a Dom all the way to the Bahamas only to have him fall for another submissive — and, to make matters worse, that same Dom has issued her an ultimatum: either submit to the handsome Doms Patrick and Nick to become a better sub, or leave the island.

Will the two undercover CIA Agents convince the gorgeous beauty that she is the woman for them or will their undercover investigation tear them apart?