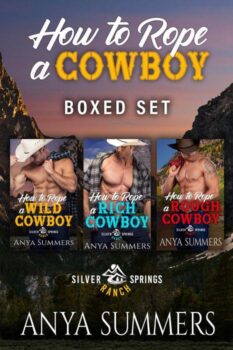 From the Bestselling Silver Springs Ranch Series, Box Set #1 with books 1 through 3!

Emmett Benson makes no apologies for his bachelor status. He revels in a woman’s surrender but does not want the responsibility of claiming a submissive for his own, because no one is worth the price of his freedom. He appreciates his friends, loves his horse, and fancies wrangling cattle every day over interacting with people. When it comes to his life, he figures he has it made, and that there is no reason to alter things—now, or in the future.

But all it takes is one lousy spill off a new, temperamental thoroughbred to cause a load of trouble. One look at the prim and proper new town doctor, and Emmett wants nothing more than to ruffle her cool demeanor. The woman is likely too tightly wound to even consider submission. He cannot desire her. It is out of the question. He must be delirious from the pain of his injuries to even be contemplating the possibility of claiming her, even though she makes him want to mark his territory and challenge any man who comes near her.

But then the doctor makes an unexpected house call and, with her sweet, feminine scent clouding his senses, Emmett makes her a bargain. He will behave like the perfect patient, for the cost of a single kiss, freely given. He never expected her to accept his offer.

He thought he was in trouble before, but after just one kiss, every dominant part of Emmett’s being thunders: MINE.

Colt Anderson is burned out. Every part of his daily life has become a tedious chore. He cannot remember the last time he took a day off or, better yet, felt a woman’s willing surrender. And it’s just his luck that on his first day off in ages, he runs into a sexy squatter on his property, never expecting that single interaction would alter the very fabric of his world.

Still, he cannot seem to stay away from the sultry scientist, Avery. Colt feels bad for her, worries that she is running from something, and decides to cover her stay at the ranch. After all, he owns the place and has plenty of cash. Although that tiny little detail is a secret he plans on keeping to himself. It is addictive having a woman look in his direction and not see dollar signs for a change.

Because when Avery casts those goddess eyes his way, he’s just a man, a man she craves and submits to body and soul, like he’s her man, and his longing for her has him tied up in knots. With trouble and danger drawn to her like magnets, Avery pulls out his protective, dominant nature. The woman needs a keeper, and he’s the perfect man for the job.

Now he has less than two weeks to convince her to stay, to make her fall for him before she discovers he’s rich. But will she hate him when she discovers his deception?

Maverick Greyson is barely housebroken. Having been raised on ranches, he spends the bulk of his days on the back of his horse, and can’t imagine a finer way to occupy his time — except maybe a night with a willing female. He loves women. Enjoys their company mightily. Relishes the available bounty of tourists and townsfolk alike, and rarely enjoys the same woman twice.

But the ranch’s newest guest, Bianca Peabody, makes him want to swear off the species entirely. The doe-eyed beauty, with her highfalutin’ attitude, makes his blood boil.

And yet the sorrow he glimpses in her one night changes everything. Now his soul hungers to have her in his arms. He burns for her love. Heaven help him, her surrender may be everything he has always needed.

For the first time in his life, Maverick is looking toward the future, and building one with the only woman he has ever wanted to claim. But she is keeping secrets…

Secrets capable of destroying him — and any future they might have.