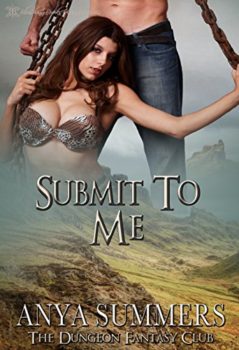 Veronica McGinnis is a single mom, more concerned with her son’s homework than dating. She lives quietly on the Scottish coast, writing articles for the local newspaper and raising her child. When her cousin Declan asks her to attend his huge wedding, she doesn’t hesitate to accept the invitation. Veronica needs to escape her humdrum existence, if only for a while. She loves being a mother, but most days, it feels as though that’s all she is. As a submissive member of The Dungeon Fantasy Club, she’s been feeling achy and needy and downright ready to jump the mailman’s bones — which, in her small town, is the epitome of desperation.

Hunter Clarke is a famous Hollywood movie star, appearing in several of the latest blockbuster films. His name and face, as well as his potential love interests, are constantly splashed across the news, right alongside politics and the latest baseball stats. One of the founding Dom members of The Dungeon Fantasy Club, he walks a tightrope, with salacious reporters just waiting to uncover the tawdry side of his life in return for a huge payday.

Hunter has to make amends with Zoey, his best friend’s fiancée, especially if he wants to remain a member of the club, so it’s with his hat in his hands that he accepts Declan’s invitation to be one of the ushers at what promises to be the wedding of the century. Hunter couldn’t be more shocked when he enters Mullardoch Manor only to discover that one of the other guests is none other than Veronica, the first love of his life, and the woman who broke his heart.

When Hunter discovers that Veronica is a submissive club member, he tempts her into a private scene. Her sweet cries as she submits to his fervent demands make him wonder how he could ever have convinced himself that he could live without her.

Veronica’s only thought, however, is how much she needs to keep the secret she’s kept hidden for ten years. When the truth is revealed, she moves heaven and earth to shield the most precious person in her life from the fallout — even if it means leaving the one Dom she knows she could give her whole heart to.

Will Hunter be able to convince Veronica to submit to him for more than just one night?