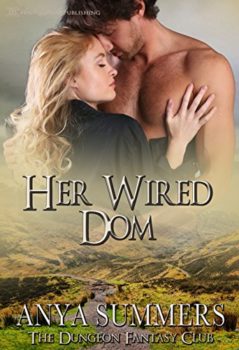 Will Evans is the CEO of a new virtual gaming company that is changing the tech world. He’s an avid gamer and a complete nerd, spending more time playing the latest hot game than doing anything else. He’s also a closet Dominant. As confident as he is in the boardroom, he’s been unwilling to unleash his primitive alpha side on a woman, afraid that his six foot six frame and muscle man strength could do irreparable damage to his partner. But then he meets the world famous ballerina Katarina Roberts at his best friend’s wedding. Her diminutive, slender form and willowy grace bring out an uncontrollable urge in Will to both master and protect her — but a dark secret from his past makes him reluctant to give in to that urge.

When Kat attends her oldest friend’s wedding in Scotland on New Year’s Eve and meets Will, who is her every fantasy brought to life, she feels as though she has finally met a man worthy of submitting herself to body and soul. Can she convince Will to be the Dom of her dreams, even disciplining her when she’s been an insubordinate little submissive, or will he treat her like precious glass and walk away?