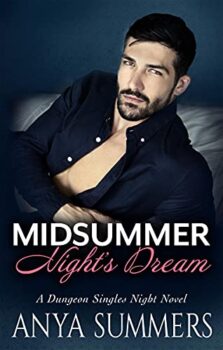 Sylvie fell for the enigmatic Dom after a single night in his arms.

And she fell hard. Never before had she craved a man with her entire heart and soul. So when Fate unexpectedly tore them apart, she didn’t want to let him go.

But life didn’t ask what she wanted.

Sylvie rocketed into Dean Ryan’s world like a force of nature. Body and soul, his heart beat for her. He couldn’t stop the craving in his blood to claim her, dominate her, give her everything she needed. Yet when he least expected it, she disappeared, shattering his hopes and dreams for a future with her in his arms, his life… his bed.

Dean’s wretched heart has not healed, yet when Sylvie walks back through the doors of Eternal Eros, he will do anything to uncover her secrets and make her his.

She shattered his heart, but he knows her sweet surrender is the only thing that can save his soul.