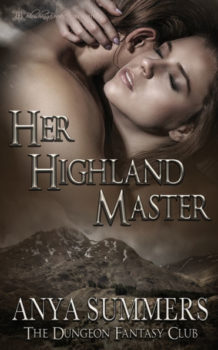 Zoey Mills’s life is in shambles. She’s been accused of leaking her upper crust Hollywood clients’ data to an online magazine for a large payday. After a wine and chocolate-filled evening of drowning her sorrows, she determines that her best course of action is to leave her home in sunny Los Angeles for a week-long vacation in the Scottish Highlands. It’s the only way she can escape from the fact that her image is being splashed across the nightly news — and it might actually give her a chance to consider what her next move should be, now that her Great Master Life Plan has disintegrated into dust.

Unfortunately, she’s only just landed and is navigating the tiny roads in her rental car when a freak early autumn snow storm hits. Zoey finds herself stranded and winds up on the doorstep of Mullardoch Manor; home of the sexy Scotsman, Declan McDougal, who is her every dark fantasy brought to life.

Declan is one of the founding members of The Dungeon Fantasy Club. As a billionaire businessman and a Dom, he prefers to keep his sexual preferences and tastes away from the boardroom. He’s also become bored, not just with the club, but also with his life. None of the subs he meets can hold his interest for more than a night and it’s been that way for a long time. He just never wants more than a brief encounter. At least, not since his ex-fiancée cheated on him with another Dom and ran away. However, that all changes when Zoey barrels into his home uninvited and upends his luxurious but stale existence.

When Zoey finds herself without a place to stay, Declan makes her a tantalizing but scandalous offer: Stay in his home for the week, free of charge, and spend each night warming his bed. Or any other time of the day, for that matter. Deciding she doesn’t have much to lose and possibly everything to gain, Zoey accepts.

With Zoey’s every sweet subsequent cry of ecstasy, Declan uncovers a sub who warms not only his bed, but slowly thaws his frozen, scarred heart. And as Zoey explores her deepest fantasies, even as he spanks her bare bottom for disobeying his rules, she finds herself wanting more than just a week of unmitigated pleasure with the Dom.

Things seem to be progressing perfectly, both in bed and out, when Zoey’s past catches up with her. When he feels betrayed once more, and fears the woman he has grown to care for is not who she says she is, will Declan still be willing to risk his heart to become Her Highland Master?